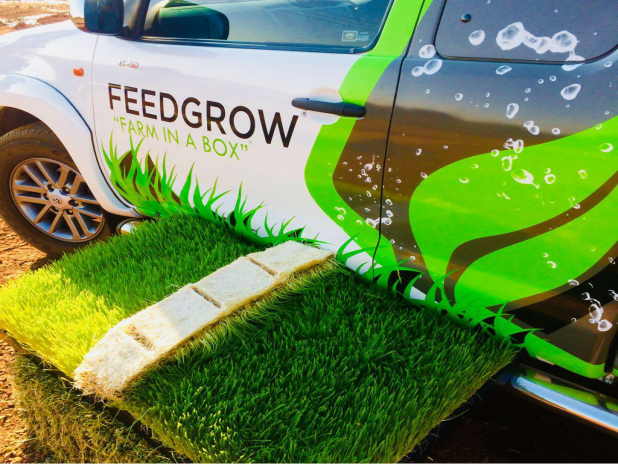 Â·       The starch in nonÂ­sprouted grain lowers pH in the rumen which renders flora ineffective and inhibits their functions. During the FeedgrowÂ® soaking cycle, which is the first step of the sprouting process, inhibitors in the seeds are dissolved. In the process, more vitamins and minerals are made available to the animals.

Â·       Of all grains, barley has the highest crude protein content of 20,4%. Moreover, 56% of that 20,4% flows through protein which is immediately absorbed by the animal with visible results within 14 days after starting the FeedgrowÂ® sprouted barley diet. Sprouting increases absorption. The sprouts are living plants with the fiberÂ­toÂ­nutrient ratio at their optimal advantage to animals. They also have the highest enzyme content of all feeds, ensuring high digestion levels that enable animals to digest low grade feeds effectively by means of cellulolysis.

Â·      Urea and molasses syrup are typically included in lowÂ­grade feed rations to break it down. This is unnecessary when feeding in combination with barley sprouts

Because of their high moisture content barley sprouts are soft and digest completely in the rumen. FeedgrowÂ® recommends that a lowÂ­grade roughage is fed alongside it to enable rumination and to transport the feed through to the lower intestines where nutrients are absorbed into the bloodstream.

Profitable production can be achieved without the inclusion medicaments, ionophore and hormone stimulants which make meatless palatable and less healthy.

By feeding animals barley sprouts, healthy organic meat is produced with good marbling and Omega3 fats, which can result in higher profits for the producer. (Information supplied by FeedgrowÂ®)